If I could go back in time to witness any single moment of the American Civil War, I think I would probably go to the Battle of New Market, on May 15, 1864. More specifically, I would go to the moment where Major General John C. Breckinridge, commander of the Confederate forces and one of the most remarkable figures in American history, realized that he had to commit to the fighting the two hundred or so boy cadets of the Virginia Military Institute or face defeat. "Put the boys in," he said.  "And may God forgive me for the order."

Breckinridge won the battle, but he wouldn't have done it without the VMI cadets. Ten of the cadets were killed and forty-seven were wounded. These men are still honored on the field of VMI to the present day. Visiting New Market is one of the most poignant experiences of any of the American Civil War battlefield, for one can easily trace the direct route the VMI cadets charged to smash the Union line, capture the enemy artillery, and help win the battle.

When I learned that a movie was in the works that would depict the events surrounding the VMI cadets at the Battle of New Market, I was both excited and concerned. I was excited because the story is almost tailor-made for cinematic treatment, as are so many of the lesser-known stories of the American Civil War. I also that the film would bring Breckinridge, a largely forgotten figure, to the attention of more people. But I also was concerned, because past movies made from Civil War subjects have often left much to be desired. Glory was outstanding, Gettysburg was very good, and Lincoln (though I have my problems with it) was a fine film. Most other attempts, sad to say, have usually been disappointments.

Considering the budget with which they had to work, I'd say that Field of Lost Shoes is a significant achievement. Overall, I enjoyed watching it and it made for a pleasant evening's entertainment. There were a few points to which I took exception, which I will detail in a moment. On the other hand, the film also raised interesting questions which are often forgotten in this day and age.

One of the main characters is a VMI cadet named John Wise. His father, Virginia Governor Henry Wise, is spoken of as an opponent of secession and slavery, when in fact he was a fervent supporter of both. The story starts with Governor Wise taking his son to see a slave auction, apparently to show him the evils of the institution. This scene was actually very effective; it's impossible not to be affected by the despair of the black family being separated by the callous buyers. John is apparently turned into a closet abolitionist by what he sees.

And herein lies a problem for the whole movie and, indeed, for Civil War fiction in general these days: audiences apparently want 19th Century characters to adhere to 21st Century values. John Wise and the other cadets can't be seen as heroes by the audience unless they are opposed to slavery. This is a problem for the rest of the movie. A black character named Old Judge, who runs the VMI bakery, is inserted into the story in order to give the cadets a slave with whom to sympathize when he runs into trouble. A scene of a cart overturning onto a black women who requires rescue is also tossed into the mix, apparently for no other reason than to remind the audience that these VMI cadets like black people just as much as they like white people.

If we're honest with ourselves, we must admit that these are not attitudes that would have been commonly held by mid-19th Century white male Virginians. I understand why the filmmakers did this, for people are so touchy and easily offended these days. The lightest whiff of "controversy" is looked upon with horror in the age of social media. But it robs the film of authenticity and makes the characters harder to take seriously. Better to let them be 19th Century people and take them on their own terms.

Field of Lost Shoes does, in fact, present reasons for which Confederate soldiers fought during the Civil War that are historically valid. A scene in which a cadet has just learned that his family's home has been destroyed by Union forces and that his family's whereabouts are unknown is rather poignant and one can well understand his desire for revenge. More interesting to me, though, is a conversation between two cadets, in which one reveals to the other his moral compunctions about slavery. The second cadet essentially tells the first that, whatever their feelings about slavery, it is still their duty to defend their homes and families. Moreover, he says, the Union will destroy everything else in the South while they destroy slavery. This manner of thinking might make us uncomfortable, for it is quite understandable and we can see ourselves making the same decision were we to be placed in their shoes. But that's probably the point.

Setting aside these deeper philosophical questions, there are some aspects of the film that bother from a historical point of view. One of the first scenes of the movie depicts a meeting between Abraham Lincoln and Ulysses Grant, which not only seems completely irrelevant to the plot of the movie but which unfairly stigmatizes Grant with the image of being a "butcher" and a "savage". Grant actually asks Lincoln, "Do you see me as a monster?" This is patently ridiculous. The undeserved reputation of Grant as being a "butcher" came during and after the Virginia campaign of 1864-65, which had not yet happened when the scene of the movie takes place. Grant's victories in the West in the first few years of the war had been masterpieces of maneuver and won at comparatively low cost in human life. Grant, as played by Tom Skerritt (who seems to not quite understand why he is there), plays no meaningful role in the course of the movie. Indeed, there seems to be no reason for Lincoln and Grant to be in the movie at all, since it really is all about Breckinridge and the VMI cadets.

Apparently the filmmakers decided Field of Lost Shoes needed a character to provide a Union perspective during the battle. For some reason, they choose Captain Henry Du Pont. This man is indeed an interesting figure, who came from one of the country's most illustrious families and who would go on to win the Medal of Honor at the Battle of Cedar Creek. But the movie makes him out to be far more important than he was. During the Battle of New Market, du Pont was commanding a single artillery battery. Yet he is depicted as having a large staff of subordinates and seemingly giving commands to the whole of the Union army. He's also depicted in the film as being sent by Ulysses Grant to keep an eye on the incompetent commanding general, Franz Sigel. I am unaware of any evidence that this was the case. David Arquette plays Du Pont quite well, but his presence in the movie seems forced and unnecessary, rather like the scenes with Grant and Lincoln.

Breckinridge is a major character, played quite well by English actor Jason Isaacs, whom I have always liked. People who enjoy history-based films know Isaacs as the ruthless British cavalry officer William Tavington in The Patriot, but he plays a very different kind of man in this film. Breckinridge was a warm, friendly, and self-effacing man with a keen intelligence and this is exactly how he is portrayed. In most scenes, Breckinridge also has a glass of whiskey in his hands, which is also true to history. The scene in which Breckinridge sits with the cadets and asks them about their plans for the future may be a bit contrived, but it still well done and full of substance. It makes the general's climatic scene, in which Breckinridge is forced to order the cadets to plug a critical gap in the line, much more effective than it otherwise would have been.

I was pleased that they pronounced the name of the town of Staunton correctly, when almost everyone in the country pronounces it incorrectly. It shows that they did the filmmakers did their homework.

All things considered, despite its flaws, Field of Lost Shoes is a good movie and I enjoyed watching it. I knew the storytelling was good when I realized that some of the boys were going to die and I cared about which ones. The scenes of combat were very well done. The characters were sufficiently fleshed out to be seen as the real people they were. A well-done film, in my opinion.

Still, it is not a masterpiece. The film that will be to the Civil War what Saving Private Ryan was to the Second World War has yet to be made.
Posted by Jeff Brooks at 6:10 AM 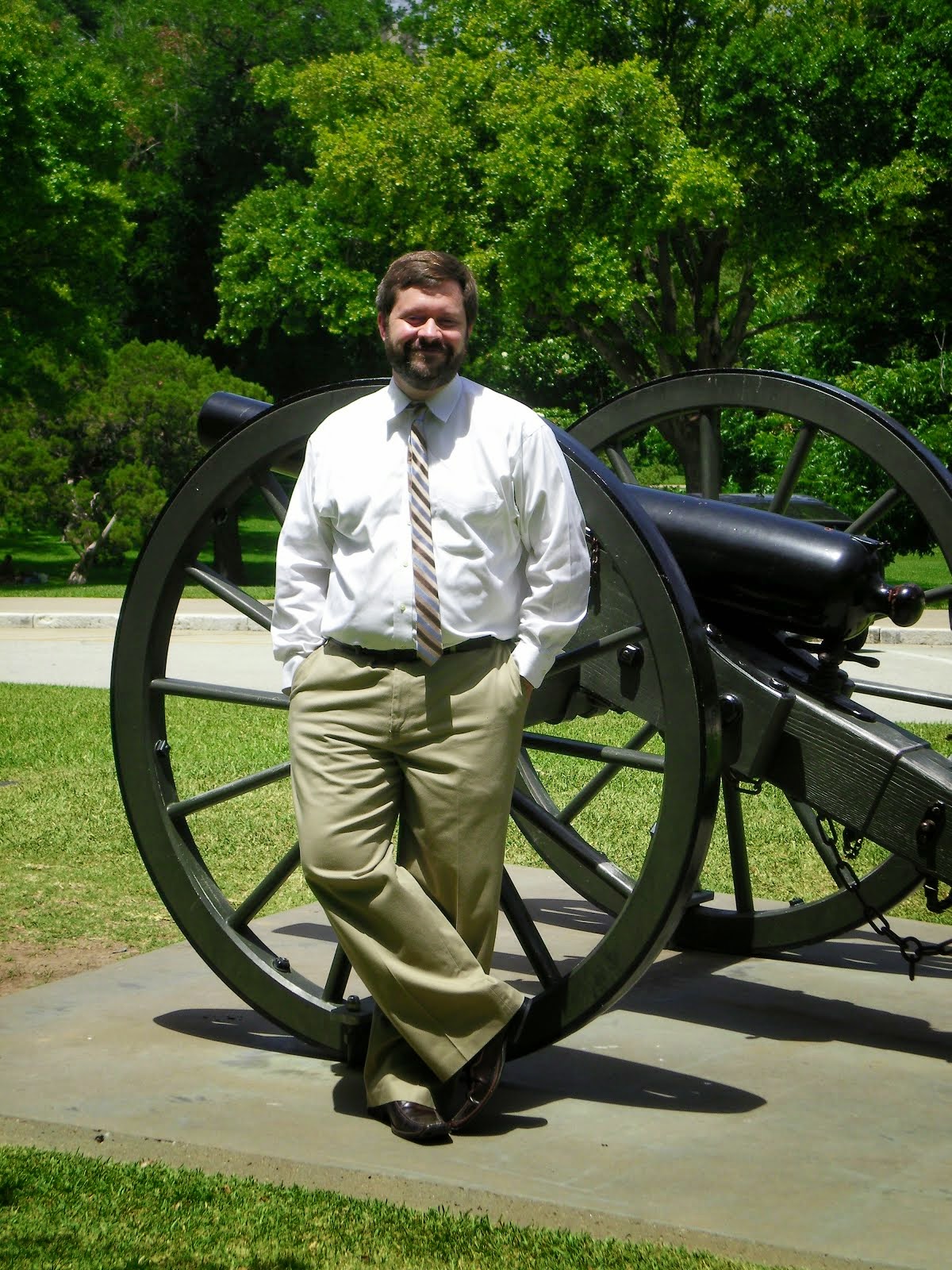 Blessed are the Peacemakers: A Shattered Nation Novella

Promote Your Page Too